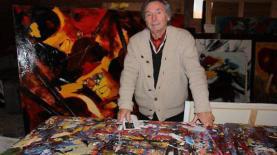 Christian Claerebout was born in Toulouse, France, in 1947. He spent his childhood in Africa, which has left an indelible imprint in his painting style. He studied art from 1966 until 1979 in Paris and Rome.

Before settling indefinitely in Brittany, he ran away to North America, lured by the United States, and New York, in particular. This is where his powerful cityscapes evolved: engorged with sweeping movement, brilliant colors and intense darks and lights. He has expanded creatively to include such subject matters as orchestras, airports, elephants and financial themes, but his expressive style is always recognizable.